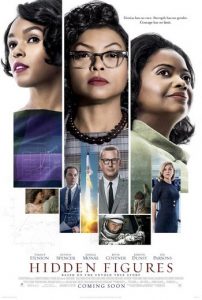 ‘Hidden Figures’ celebrates overlooked and crucial contributions from a pivotal moment in American history. The film tells the incredible, untold story of Katherine G. Johnson, Dorothy Vaughan and Mary Jackson, brilliant African-American women working at NASA, who served as the brains behind one of the greatest operations in history. The launch of astronaut John Glenn into orbit was a stunning achievement that restored the nation’s confidence, turned around the Space Race, and galvanized the world.

‘Hidden Figures’ is an uplifting story filled with ‘firsts’ at a time in the 60s when segregation was rife, women’s roles were compromised and the NASA space program was keenly competing against the Russians.  Three delightful performances bring these remarkable women to life.
‘Hidden Figures’ will be screened on Friday 3rd November at the Jubilee Hall, Slade Road, Portishead.  The film starts at 8.00pm (with refreshments available from 7.30) and tickets cost £5.00.  All are most welcome.