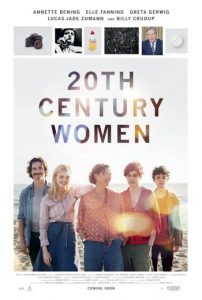 ‘20th Century Women’ is a heart warming drama with a fantastic ensemble cast. During the summer of 1979, a Santa Barbara single mom is living in a bohemian household, shared with 3 like minded spirited people, to help pay the rent.  She decides that during this period of social and cultural turmoil, the best way she can parent her teenage son Jamie, is to enlist her young tenants – a quirky punk photographer, a mellow handyman and her son’s shrewd best friend – to serve as role models.

For all the tumult and confusion besetting the protagonists, the film is bathed in a golden glow and reveals much about the weaknesses and strengths, victories and defeats that accompany life’s journey.  The sparkling screenplay, blends wry observation, provocative conversation and frequent hilarity and the 3 female characters are vibrant, vulnerable and engaging, none more so than Annette Bening as the mother, oozing wit and wisdom.

‘20th Century Women’ will be screened on Friday 5th January at the Jubilee Hall, Slade Road, Portishead.  The film starts at 8.00pm (with refreshments available from 7.30) and tickets cost £5.00.  All are most welcome.