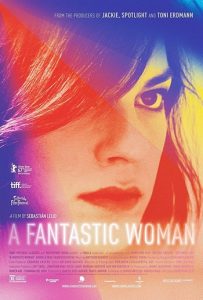 A Fantastic woman is  a Spanish Film about  Marina, a transgender waitress and singer, and Orlando, an older man who runs a printing company, They are in love and planning for the future when,  after celebrating Marina’s birthday one evening, Orlando falls seriously ill. Marina rushes him to the emergency room, but he passes away just after arriving at the hospital. Instead of being able to mourn her lover, suddenly Marina is treated with suspicion. The doctors and Orlando’s family don’t trust her. A woman detective investigates Marina to see if she was involved in his death. Orlando’s ex-wife forbids her from attending the funeral.   She is forced to fight and show everyone what she is: complex, strong, forthright and fantastic.