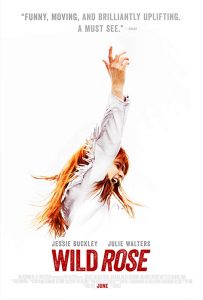 Wild Rose tells the complicated story of Rose-Lynn, a 23-years old working-class girl from Glasgow who has just been released from jail. She is reunited with her children, cared for since her imprisonment by their grandmother Marion, who despises openly her daughter’s lifestyle and struggles to understand her determination to travel Nashville to become a famous country singer.

After a rocky start, she gets a job as cleaning lady and is helped in her efforts to travel to Nashville by the lady of the house, who recognises her talent.  The road ahead is rocky and Rose-Lynn finds herself trapped at a crossroad, struggling against her own worst enemy, herself.

Though music is the backbone of the film, the heart of it is the mother-child relationship. How strong that bond is. How it lasts for their entire lives. The film offers an accurate portrait of the pursuit of a dream – one in which talent is just part of the equation, and reality, sooner or later, comes crashing down.