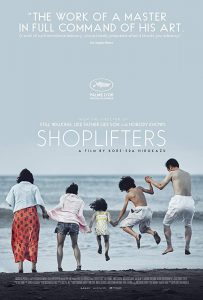 Shoplifters was inspired by reports on poverty and shoplifting in Japan.  It won the Palme D’or at the Cannes Film festival, as well as being nominated for an Oscar and Golden Globe award.

At the centre of the film is a non-biological family, who rely on shoplifting to cope with a life of poverty.  After one of their shoplifting sessions, Osamu and his son come across a little girl in the freezing cold. At first reluctant to shelter the girl, Osamu’s wife agrees to take care of her after learning of the hardships she faces. Although the family is poor, barely making enough money to survive through petty crime, they seem to live happily together until an unforeseen incident reveals hidden secrets, testing the bonds that unite them.

‘Shoplifters’ is funny and emotional, uplifting and heart-breaking.  It shows that families may disintegrate, but love keeps us ticking over.