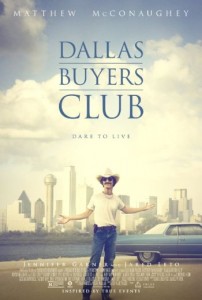 In this true story, Matthew McConaughey is a dyed in the wool homophobe and misogynist, who’s fond of drink and drugs, leaps rodeo fences to escape debts and believes only “fags” get Aids.   However, it’s a bleak, sunbaked 1986 and Woodroof, having received the death sentence of an HIV-positive diagnosis, responds with furious macho denial.

He responds badly to AZT (at that time, the only officially approved medication), and then circumvents FDA regulations by importing unlicensed drugs that he distributes “for free” through a club, which instead charges an “admission fee”, a loophole that meant technically he wasn’t selling the medication. The operation was a scam, but the results were impressive.

Woodroof shocked doctors not only by surviving for many years, but also by evolving into an illegal drug importer and a provider of hope. The film shows how a higher purpose can sneak up on a low-life cowboy. He’s reborn, ennobled by a crisis and in love with his new role. The change is both modest and monumental. McConaughey’s explosive, unerring portrayal defines what makes an actor great, blazing commitment to a character and the range to make every nuance felt.

‘The Dallas Buyers Club’ will be screened on Friday 6th February at 8.00pm (with refreshments available from 7.30) in the Jubilee Hall on Slade Road. Admission is £5.00 (£4.50 concessions) and all are most welcome.