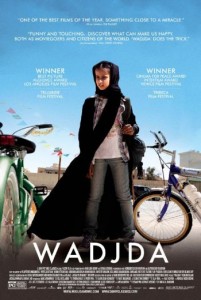 Wadjda is the first Saudi Arabian feature film to be directed by a woman. Shot in the suburbs of Riyadh, it tells the story of a 10-year-old girl who wants to buy a green bicycle to race against her friend Abdullah.

Wadjda shouldn’t want a bike (her mum’s worried – it could ruin her virginity), and she shouldn’t, as a girl on the edge of puberty, really be playing with Abdullah. But she does, cheerfully and with cursory regard for mum’s fretting or the disapproval of her staunchly traditionalist teacher.

A Qur’an reading competition at school offers her the chance to win the money for the bike. So she acts the model student and gets her head in the book. The real reason for her new-found interest in devout study is kept secret.

Wadjda is a funny, romantic story which subverts the western fallacy that womanhood in traditionalist Islamic countries must always be miserable, while never soft-pedalling in its push for reform. Every scene, every line of dialogue, every observation leads up to an emotional conclusion that creates a genuine affection for this unassuming gem of a film.

‘Wadjda’ will be screened on Friday 6th March at 8.00pm (with refreshments available from 7.30) in the Jubilee Hall on Slade Road. Admission is £5.00 (£4.50 concessions) and all are most welcome.