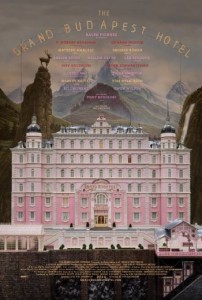 ‘The Grand Budapest Hotel’ is a wedding-cake-like, pastel-coloured establishment situated somewhere in 1930s Middle Europe and peopled by eccentrics and lunatics. Ralph Fiennes plays a rare comic role as Monsieur Gustave, a concierge who wavers brilliantly between thug and gentleman aesthete. From Gustave’s mouth pours a head-spinning cocktail of politeness and filth as he becomes embroiled in the murder investigation and inheritance tussles that follow the death of one of his most loyal guests, the elderly Madame D (Tilda Swinton, barely recognisable beneath a carapace of make-up).

‘The Grand Budapest Hotel’ comes with its own ready-made theatre and uniformed cast. From here, Anderson breaks out with verve on to trains, ski runs and cobbled streets to spin a wickedly funny tale that celebrates the final glory days of a dying world order. It’s all given a bombastic lift by a musical score which crescendos in organs and drums. Full of Wes Anderson’s visual signatures – cameras that swerve, quick zooms, speedy montages – it’s familiar in style, refreshing in tone and one of Anderson’s very best films.

‘The Grand Budapest Hotel’ will be screened on Friday 10th April at 8.00pm (with refreshments available from 7.30) in the Jubilee Hall on Slade Road. Admission is £5.00 (£4.50 concessions) and all are most welcome.